There will be a lot of folks out celebrating the new year tonight, and some may get more than a little rowdy. But they are unlikely to rival the parties of old in the 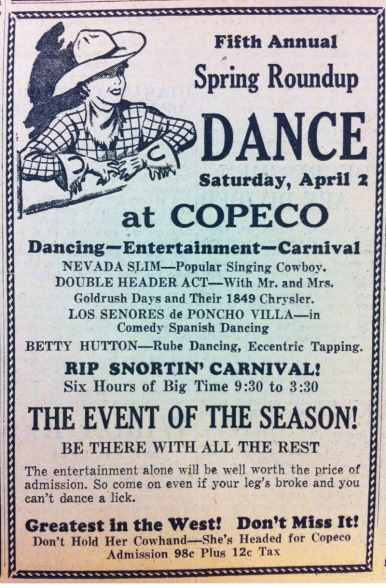 dance halls that once were popular in the Grand Valley and around the Western Slope.

Consider this description of the old COPECO dance hall northwest of Grand Junction:

“It seemed like the devil had been turned loose,” said one visitor. “Drinking and dancing was the only thing left. Even nearby homes had been broken into because of the rough bunch that came to the place.”

The newspaper ad here is for a spring dance, but COPECO had New Year’s parties as well.

For more history on COPECO, check out the entry under “My Columns” in the menu above.

Happy New Year, and don’t let the devil to be turned loose in your celebration.

Dan Dillon Casement was a fascinating character and his ranch in Unaweep Canyon was an important part of Western Colorado history.

I’ve written about Casement and his ranch in a couple of history columns now, (use the “My Columns” tag above to read the most recent one). This is from his book “An Abbreviated Autobiography of a Joyous Pagan.” It’s his description of Christmas at the Unaweep ranch in 1891.

“Christmas that winter in the Unaweep was celebrated with 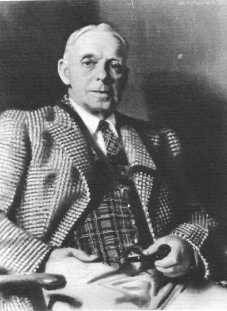 an elaborate dinner. Isabel (wife of Casement’s college friend and ranch employee, Jerry Black) was radiant in a Paris gown that had been a year in retirement. We men resurrected our tails and white ties. I had previously made a difficult trip to Grand Junction and had brought in the goods essential to the occasion. There was a big turkey stuffed with chestnuts. Hidden under the table, until the appropriate moment, a quart of champagne cooled in a bucket of snow. This by way of a surprise to Jerry. The glasses in which it was served had taxes the resources of all the bars in Grand Junction. Although they were of orthodox shape with long, hollow stems, they were plainly peerless in their weight and thickness. Put to their proper use only on that memorable evening, one of the, at least survived the ravages of time for nearly fifty years. A staunch reminder of the long ago.”

Have a merry, Western Colorado Christmas, everyone.

Forty years ago this autumn, Jerry Craghead and I got together and created Eagle News Service, because we were both out of work and we didn’t know any better.

Kathy Heicher (Kathy Lell at the time) was the editor of the Eagle Valley Enterprise weekly newspaper then and she rented us a small office space in the back of the Enterprise, next to the old linotype machine. She also purchased news stories from us, provided tips on other stories and helped us in numerous ways.

My wife, Judy, had a real, paying job at the time, so she basically supported Jerry and I in our journalistic endeavor. We made enough money to cover expenses, but not a lot more.

Eagle News Service functioned as a sort of miniature Associated Press. We gathered news from around Eagle County, sold the articles to a number of weekly papers and one daily, as well as a couple of radio stations. We had several newspapers under contract, but were never able to expand as we hoped.

Our biggest breakthrough came when one of the Vail ski gondolas fell in early 1976. We were all over that story.

I was involved with Eagle News Service for about a year, then left to work for The Glenwood Post in Glenwood Springs, Colo. Craghead kept the business going another couple of years. We worked hard, drank harder and had a great deal of fun. And Craghead was my mentor. Eagle News Service helped launch my journalism career that lasted four decades.

This photo is from a gathering we had in October to celebrate the anniversary of Eagle News Service. Craghead’s plaque lists him as “Founder” of Eagle News Service, Kathy’s refers to her as “Enabler in Chief” and Judy’s correctly notes she was “Chief Financier” for the organization.

The Vail Daily online gave us a shout-out for the anniversary. Here’s the link: http://www.vaildaily.com/news/towntalk/19002949-113/eagle-news-service.

Last weekend, I was asked to contribute to a missionary couple working in Central America, building and ma

intaining schools and overseeing other missionaries.

Not long ago, supporting such an effort would have been a no-brainer for me. Of course I want to help and maintain schools in poverty-stricken regions of the world.

However, in the past decade I’ve spent a good deal of time researching relations between native groups in North America and religious organizations. It began with the Utes and research for my book, “Troubled Trails,” but it has continued with the Ojibwe and mixed-blood families of the Lake Superior region and, more recently, with the Puebloan and Genizaro groups of northern New Mexico.

Historically, in each of these places, the missionaries from European religious groups, be they Catholic or Protestant — even if they were present with the best of intentions — worked to destroy or substantially diminish the cultural traditions of the natives — especially spiritual traditions.

Part of it was government inspired. In New Mexico initially, it was the Spanish colonial government that sought to obliterate the spiritual traditions of the Pueblans and Genizaro. There is a wonderful book called “The Witches of Abiquiu” that examines the witch trials in northern New Mexico in the mid-1700s. In this case, the “witches” were actually native shamans, spiritual leaders and healers who used animal imagery, potions, mysticism and even rock petroglyphs in their ceremonies.

In the United States, the official government policy for more than 150 years was to assimilate Indians into “civilized” society and rid them of any vestiges of their native culture. That’s why Indian schools forbid not only the practice of native religion, but native clothing, hairstyles and the speaking of native languages.

Surprisingly to me, the French Catholics of the Lake Superior region were more tolerant of indigenous views than the Protestant missionaries who came later. One exceptional book that examines a Protestant viewpoint in the region is called “The Ojibwe Journals of Edmund F. Ely, 1833-1849,” edited by Theresa M. Schenck.

For more of a global perspective, there’s “Missionaries, Indigenous Peoples and Cultural Exchange.”

Regarding the missionaries to Central America, I visited a website that described their work, and it sounded wonderful. But on another website about the Maya people who reside in the region, I found this quote: “Fundamentalist missionaries are also responsible for destroying the Maya culture with a more insidious, though nonviolent, strategy.”

You don’t even have to be part of a church to go. There are websites that offer, for a price the opportunity to “Do Missionary Work With Mayan Indians.”

I am a Christian. And I believe religious organizations, especially Christian ones, have done a great deal of good in feeding, clothing, housing and educating those in need, ministering to the sick and those in prison. But the record of Christian missions to indigenous people has been far from spotless. So, before I contribute financially or by other means to missionaries attempting to minister to native groups, I’ll ask how the cultural traditions and history of the native people are taken into account while doing so.